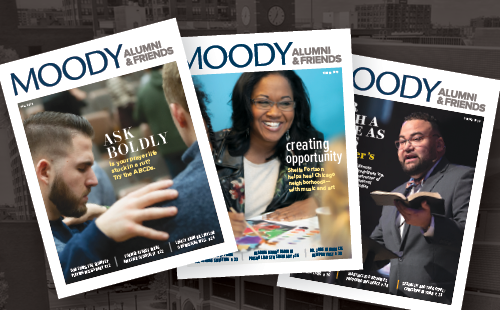 The Moody Alumni Association is a dynamic relationship of former students who share a common spiritual heritage. Our mission is to facilitate mutually beneficial relationships based upon shared Moody Experiences and to serve as a vehicle for relevant ministry around the world.

Four values drive the direction of the Alumni Association. Connects alumni with each other and with Moody, a special relationship that and deserves to be preserved and enhanced.

Provides encouragement and ministry to alumni throughout their lifetimes.

Honors Moody's rich history and the people who shaped Moody's ministries over the years.

Considers, represents, embraces and serves the interests of all alumni around the world.

Although the constitution, by-law, and purpose statement of the Association have been revised over the years, serving Moody Bible Institute and bringing together Moody Alumni for fellowship still remains its top priorities.

In early 1916, A. F. Gaylord (1891), Dr. H. W. Pope and Dr. P.B. Fitzwater (1898–99) each sent a letter to the executive committees of Moody Bible Institute suggesting the formation of an Alumni Association. The three men did so without the knowledge of the others’ suggestions.

Soon after, Mr. Gaylord and Dr. Fitzwater visited a number of cities extending from the Atlantic to the Pacific to establish local fellowships. In 1919, E.E. White (1901) was employed as the first executive secretary of the association. In 1922, he was succeeded by Charlotte A. Cary who visited alumni around the country and helped in the associations growth and development. Miss Cary and Dr. Fitzwater continued to visit various cities and attended alumni gatherings around the country.

The late 1940s and early 50s saw tremendous new developments by the Association as they continued to grow and thrive. Click on a year to see what happened then.

Nothing in life can make an impression quite as deep and profound as a great teacher. Moody professors have all been there. They have firsthand experience doing real ministry—and they've been there for you. Now you can be there for them.

With a gift to this fund, you invest in Moody's faculty and their ongoing ministry - further extending their role in Moody's vision to equip people across the globe, cultures and generations with the truth of God's Word.

For more information about our board and staff, click here.